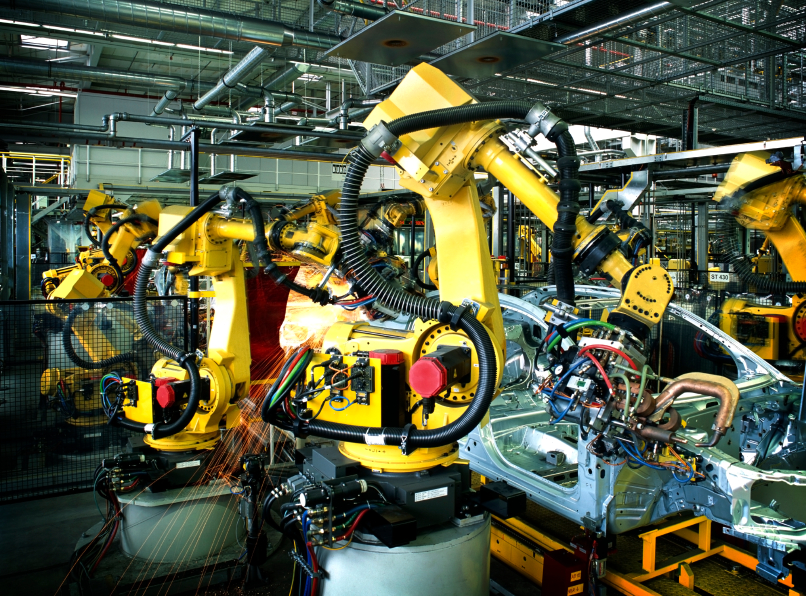 The traditional thought on including automation in a factory setting was that it would perform all of the dirty and dangerous jobs, but not be able to do much more than that. This view, however, is quickly changing as technology gives rise to more sensitive and more utilizable.

While most auto plants use robots for welding and other dangerous tasks, Audi marries a high level of automation with a multitude of other advanced manufacturing technologies, including low-power lasers driven by optical sensors; innovative combined bonding and welding, which saves both production time and car weight; and regenerative braking in lift and conveyor systems to reduce energy costs.

At Audi’s A3 body shop in Ingolstadt, the robots are roughly equal in number to the 800 employees. They do most of the heavy lifting, as well as potentially dangerous spot welding and bonding, and tediously repetitive testing. To Bernd Mlekusch, head of technology development production at Audi, the benefits of automation include much higher productivity and reduced demand for untrained workers. At the same time, workers with more training and greater specialization are increasingly needed, he says. German automotive workers, and German manufacturing workers in general, are already paid significantly more than their American counterparts.

The robots that are used in the Audi plant not only take care of a majority of the dangerous work normally performed by untrained employees, they also collect a large quantity of data that can be analyzed and be used to improve the function of the factory itself.

The vision is that data from every step of production will not simply pass from one shop to another within a business—such as from Audi’s body shop to its paint shop—but will eventually transit between different partnering companies, optimizing the production process without human input by altering speeds, predicting which components are likely to have been damaged during shipping or tooling, changing the order in which items are built, and reordering parts from suppliers.

Of course, robots haven’t completely taken over the factory floor in Germany. There are still tasks that robots are unable to perform and humans are still better equipped to handle. By taking on the more dangerous tasks and improving the efficiency and productivity of those tasks, companies like Audi are able to bring on more, highly trained workers to perform these more human-centered tasks in greater numbers.

Audi’s cars are not entirely built by computers and robots, of course. As I pass by an area where people attach mudguards, rear fenders, and a few other parts, one of the engineers chaperoning my visit explains that some stages of physical production are still worker-intensive, whether because of the size or location of the parts involved or the need to perform certain tasks with a precision that robots aren’t currently able to achieve.

This example of how factory automation has been deployed in a German automotive factory highlights the benefits of employing automation in manufacturing, especially with the advancements in technology that we see today.

Read more about how factory automation can be deployed successfully.