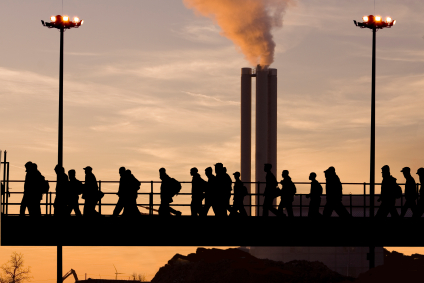 From the Chicago Tribune:

With steady growth in exports and manufacturing jobs, the Illinois economy is beginning to make moderate gains. But government-sector layoffs and a weak construction market continue to challenge the state, according to The State Monitor report, released Monday by BMO Capital Markets Economics.
…
Overall, the Illinois jobless rate has fallen 8.7 percent from more than 10 percent in late 2011 as equipment makers benefit from expanding exports. Exports hit a record high in the first quarter, helped by a weak U.S. dollar and higher global demand. Exports to China made up about 6 percent of the total in 2011, up from 2 percent 10 years earlier. All told, manufacturing jobs in Illinois are up 2.8 percent year-over-year, BMO said.

It’s always worth considering that a “weak dollar” means that buying U.S. goods is cheaper for foreign purchasers, which can be the intentional result of the Fed’s monetary policies, meant to stimulate employment. We’ll be watching how this helps the region moving forward.