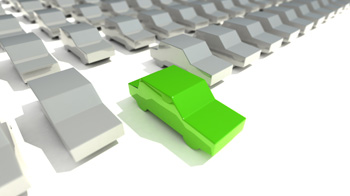 Despite the rise in popularity and awareness for alternative fuels and motors that run on them, there is still interest in a car that uses no fuel at all. The electric car is that solution. It may seem simple, but there are many hurdles yet to cross before the electric car can become the standard vehicle on the roads. To make this transition, much of the leg-work must first occur in manufacturing.

Governments are designing tax cuts and incentive to get alternative energy cars sold, but manufacturers must equip themselves to handle the new systems. The current manufacturing infrastructure is oriented towards accommodating fuel powered vehicles. Before we can mass-produce electric cars, we need to start build the machines that will make the electric cars.

The specs for the exterior of the vehicle are the same as the others, with the exception of design variations. The real difference comes in manufacturing the engine and drive components.

Electric vehicles are made up of materials that are much lighter than the conventional steel and plastic, but are just as stronger or stronger. They are made of carbon fiber and/or magnesium alloys. Current factories are outfitted with machines that work specifically to stamp, press the steel, and mold the plastic. Even some of the components of the paint will need reconsideration.

Even the plants designed to make what we now classify as small cars, must be refitted with assembly lines and conveyor systems to accommodate a car as small as the Nissan Leaf. The tools and manufacturing robotics used to work on the vehicles will need to be scaled down as well to accommodate smaller cars.

Parts like the under-body of the Nissan Leaf, which is required to protect the battery, is a new component that manufacturers will have to consider when redesigning their processes for other electric vehicles. Another is the electric battery itself, which will require entire new manufacturing lines, processes and potentially even plants.

Along with accommodating the new cars, engineers and plant managers will have to design equipment so that the additional processes needed on electric vehicles can be easily circumvented when building the fuel-powered cars that people will certainly still buy.

Ushering in the era of the electric car isn’t going to be simple for a society built around burning fuel for transportation. Despite the incentives and demand, you still have to find a way to actually build the cars. This is going to take a bit more thought from all auto manufacturers—fuel powered or not.