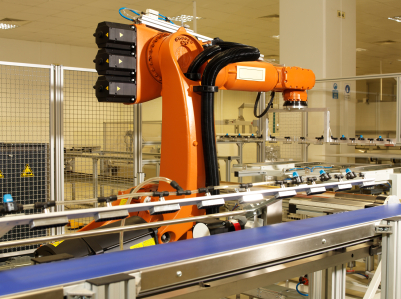 Is It the Future Yet?

The New York Times has a pretty interesting piece this week, not so much about the state of the manufacturing industry today as about where it could be tomorrow:

This is the future. A new wave of robots, far more adept than those now commonly used by automakers and other heavy manufacturers, are replacing workers around the world in both manufacturing and distribution. Factories like the one here in the Netherlands are a striking counterpoint to those used by Apple and other consumer electronics giants, which employ hundreds of thousands of low-skilled workers.

At what point will all the manufacturing jobs go to robots? Some say soon:

“At what point does the chain saw replace Paul Bunyan?” asked Mike Dennison, an executive at Flextronics, a manufacturer of consumer electronics products that is based in Silicon Valley and is increasingly automating assembly work. “There’s always a price point, and we’re very close to that point.”

We think that’s far-fetched, though. Here’s an alternate view:

But Bran Ferren, a veteran roboticist and industrial product designer at Applied Minds in Glendale, Calif., argues that there are still steep obstacles that have made the dream of the universal assembly robot elusive. “I had an early naïveté about universal robots that could just do anything,” he said. “You have to have people around anyway. And people are pretty good at figuring out, how do I wiggle the radiator in or slip the hose on? And these things are still hard for robots to do.”

Make no mistake: improvements in the quality and availability (which is to say, affordability) will continue the trend of increased automation in factories throughout the world. But there will always be a need for higher-skilled manufacturing workers, both in keeping the automated systems working effectively, and in developing new ways to use them.