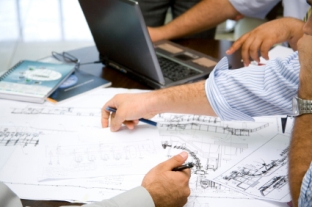 Reuters and the Associated Press both have stories on a recent report by the Institute for Supply Management on job growth in the Manufacturing sector. Here’s Reuters:

ISM’s index of national factory activity fell to 49.6 in August, from 49.8 in July, and shy of the 50.0 median estimate in a Reuters poll of economists. A reading below 50 indicates contraction in the key sector.
“Overall, today’s report keeps intact concerns that industrial output growth could slow to a crawl in the remaining months of 2012,” said JP Morgan economist Michael Feroli.

And here’s a similar report from the Associated Press, this time part of a larger coverage of oil prices:

The Institute for Supply Management said Tuesday its index of U.S. factory activity fell for the third straight month, suggesting more weakness in the U.S. economy.

As always, it’s important to look past the headlines. These reports are indeed troubling, but the fluctuations are of course short-term, and part of a much bigger picture. We’ve known since the recession started that manufacturing would return, but would probably not look the same as it has in the past. In particular, we’re seeing higher returns to automation, which in turn means that the demand for labor in manufacturing tends to be for higher-skilled labor, and for less labor overall.
The industry still has a lot of gains to make, but recent and similar downturns in manufacturing output in Europe and Asia suggest that the world economy at large still has some demand-side issues to resolve, which means that for now, all eyes are on governments, particularly the US Fed, to see what will happen next.