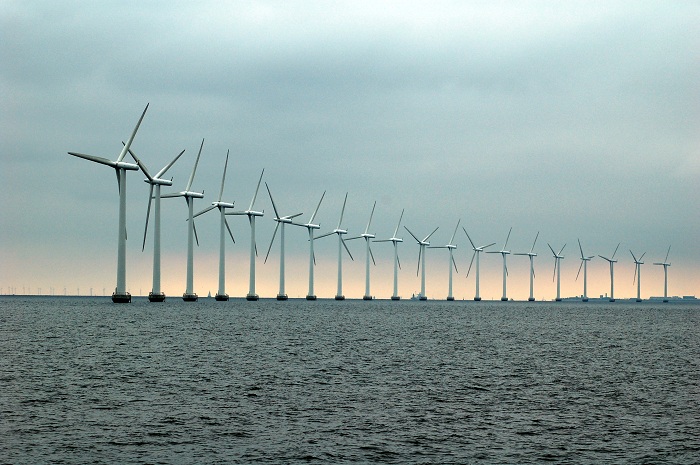 Taking The Wind Harvest To Sea

Wind energy was once a futuristic idea, thought to be as far off as the era of jet packs and flying cars. Today, however, it is not uncommon to drive through the Indiana or Michigan countryside and see the sleek, stark white wind turbines hard at work. In fact, the American Wind Energy Association estimates that over 40% of the new energy capacity generated today is from wind power. Wind turbines are already well integrated into the U.S. power supply. However, there is still far too much room for improvement before the country is run completely on the power of wind. That’s where offshore wind power comes in.

Why going offshore is attractive

Wind is the cash crop. With enough of it, the U.S. could greatly reduce its dependence on fossil fuel generated energy. The turbines themselves generate no environmentally harmful gases or residues of any kind. Wind energy is also very cheap compared to any other energy source. Current land wind projects actually allow landowners to make money by renting the land surrounding the turbines for grazing or crops. Small turbine owners have even sold energy back to their local utility companies, as the small turbines produce too much power for a single home. There is a problem with the land wind projects, however, and that problem is space.

Offshore wind projects would multiply the amount of power generated by the turbines by using the ever abundant and extremely powerful winds from the oceans and Great Lakes. The power would sustain the community through times of peak usage, as the sea winds are much more constant than those found inland. These offshore projects would also generate power that is more easily accessed by the larger American cities located near the coasts. with land wind projects for the central U.S., the lights burning across the nation will be fueled by natural, renewable wind power.

The European nations began their exploration of offshore wind power in 1991, according to the The Guardian, with a project near Vindeby, Denmark. At the time, the floating wind turbines were very experimental, but produced results that were much better than expected. The Vindeby project consisted of 11 turbines. Over the years, the European pioneers have tested four types of foundation assemblies for windmill in the sea:  floating, monopole, tripod, and gravity structures.

For years, the Europeans were at the forefront of testing these structures. With the information gathered over the years, small countries like the Netherlands are expecting to run their country’s electrical systems almost complete on wind power before the end of this decade.

The U.S. isn’t far behind. Offshore wind energy will help boost the economy while reducing the nation’s dependency on resources that are harmful and getting more and more scarce each day. While the U.S. is far from the Europeans in the eagerness to jump on the wind bandwagon, officials still expect to generate over 300 gigawatts of electricity. Over 54 gigawatts are expected to come from offshore wind power.