Event by The GhostLight Theatre 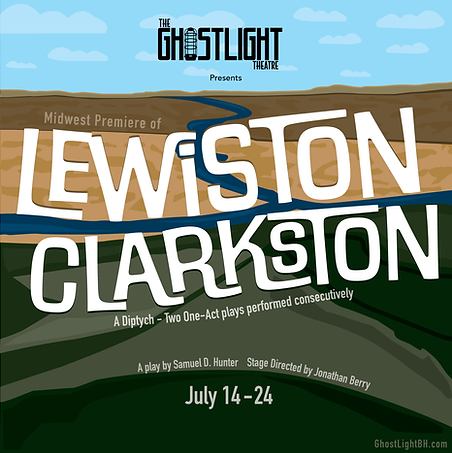 Lewiston/Clarkston – a Midwest Premiere! A Diptych – Two One-Act plays performed consecutively A play by Samuel D. Hunter. Directed by Jonathan Berry. July 14 – 24 6pm Thurs/Fri/Sat/Sun This play includes two acts in two distinct settings – Lewiston will be staged in our outdoor theater space, and the second act Clarkston will be staged indoors in our black box theater. During intermission, we are offering dinner, catered by The Brick House. In our theater lobby, there will be a cash bar, and desserts catered by The Brick House. LEWISTON: Alice and Connor sit by their roadside stand selling cheap fireworks while developers swallow the land around them. Promised a condo in the new development, their future is secure. Enter Marnie, Alice’s long-lost granddaughter, proposing to buy the land to save her family’s legacy. Marnie and Alice will become reacquainted with each other’s deeply held secrets, uncertain pasts, and hopeful futures. Hunter, a 2014 MacArthur Fellowship recipient, explores the emotional frontiers of a family struggling to make a home in the vastness of the American landscape with affection, poignancy, and a profound sense of empathy.​CLARKSTON: Jake meets Chris when they are assigned to the same night shift at Costco in Clarkston, Washington. Chris has a hard life; his mom is a meth addict, and living in Clarkston has forced him down a dead-end road. He has promise, but he’s “stuck.” Jake went to a liberal arts school, is gay and out, but fled his Connecticut town when he was diagnosed with a fatal illness. Wanting to see the ocean, he came to Clarkston, but was sidetracked by his illness. He and Chris form an awkward bond: both are gay, but have led completely different lives. Can they learn to help each other?